What I did at Nordic Game Jam

This weekend I participated in the Nordic Game Jam - the first and biggest instance of the Global Game Jam event.

The basic idea is that lots of people meet and split up into small groups that each make a game in about 40 hours. That's some seriously intensive game making, which is very exciting and fun (and exhausting). Because the games are so small and quick, there is unlimited room for wild experimentation which would not often be risked in larger scoped games with more serious commitments.

In my group we made Preschool Theater Director - a game where you have to direct a chaotic set of pre-school kids in order to enact Shakespeare's "A Midsummer Night's Dream" on the stage in front of a demanding audience of parents. You can play it online here via the Unity browser plug-in. 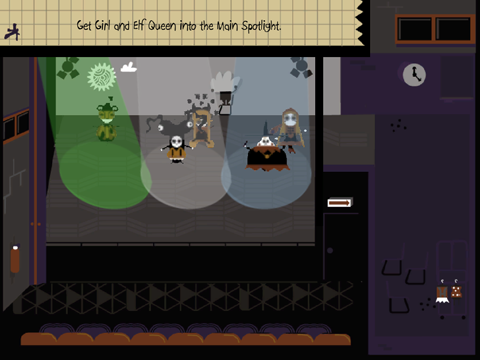 The game is over quite quickly (if you can remember the names of the children anyway) but the graphics and sound design and general sense of attempting to direct small clueless kids makes it for a funny experience.

Florian Sänger made the graphics, Bernie Schulenburg the sound and voices, Kasper Clemmensen produced the music, and Nils Deneken contributed with bits here and there though he was busy working on another game at the same time. Lau Korsgaard helped with some initial prototype programming before family commitments took over. After that I was the only programmer on the game which made me somewhat of a bottleneck, but I'm glad we got it into a state where it's fully playable and actually a bit of fun.
Read More »
2 comments:
Newer Posts Older Posts Home
runevision
Follow
Blog Archive